Puffed corn snacks are delicious and reasonably priced cereals of relatively poor nutritional quality. Sesame seeds are rich in essential amino and fatty acids, phenolic compounds, tocopherols, and antioxidants. In this study, puffed corn snacks were produced by adding 0% (control sample), 5%, 10%, and 15% levels of sesame flour to the recipe and stored at room temperature (24°C) for 60 days. The fatty acid composition, tocopherols, sesamin and sesamin, phenolic compounds, peroxide value (PV), acidity (AV), and sensory evaluation of the samples were determined.

The results showed an increase in oleic acid content and a significant decrease in palmitic acid content (p < .05) in all samples at 10% and 15% inclusion levels. Phenolic compounds, γ-tocopherol, sesamin, and sesamin were significantly increased in all formulated samples.PV results indicated that formulation samples were more stable as the percentage of sesame powder increased, while AV values increased significantly during storage. The inclusion of 10% sesame powder in the snack formulation positively affected the stability, sensory and nutritional quality of the product. This approach could be used to modify the nutritional quality of this food product and introduce it into the food market as a relatively healthy snack.

Extrusion is one of the most important new processes in modern food technology; its application has increased in the last two decades. Extrusion is an advantageous, clean and more efficient technology that can produce products with the same or even better product quality than conventional technologies. The process has been used to produce a wide variety of foods, including snack foods, breakfast cereals and other ready-to-eat textured foods.

Snack foods are tasty and affordable products with a wide variety that are popular with consumers of all ages. Puffed corn snacks are found in the snack category and are made from corn grits, rice, wheat, or other grains, often flavored with cheese, oil, chili, onion, garlic powder, and many other spices. However, health concerns have led many consumers to reduce the consumption of puffed snacks in their diets, as many of these products contain 25% oil, which contains saturated fatty acids, and high levels of trans fatty acids. On the other hand, their main ingredients are grains with low protein and essential amino acid content, especially lysine. 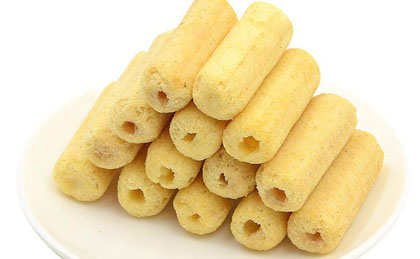 Among other ingredients, vegetable oils are used in puffed corn snack formulations. Sesame oil can also be used in the formulation instead of its powder. However, sesame seeds still contain some bioactive and nutritional compounds such as amino acids, vitamins, phenolic compounds, fiber, and other hydrophilic components mainly in the cake of the oil extraction process. Therefore, in this study, sesame seed flour was used instead of its oil to make the corn puffed snacks more nutritious.

Sesame oil is high in linoleic and oleic acids, followed by palmitic and stearic acids. The addition of sesame flour to the puffed corn snack material resulted in significant changes (p < .05) in the fatty acid profile (Table 1). Palmitic and linolenic acids decreased with increasing sesame flour content because of the low content of these fatty acids in sesame flour. Increasing the percentage of sesame flour in the formulation resulted in a significant increase in oleic acid in the processed samples due to the high oleic acid content in sesame seeds ( p < .05). On the other hand, stearic and linoleic acids were not significantly different from control samples in the formulated products ( p < .05), which was related to the content of these fatty acids in sesame seeds and in the oil used in the puffed food products corn snack formulations.

SENA has become a production-study-research integrated supplier of puffed food solutions. If you want to get more information about the food production line, welcome to contact us today or request a quote.

Next article: Is Buckwheat Better For You?

What can we help you?

Would you like to know more information of food industry?